New on cinefile?
Register for free or Redeem voucher

In your Watchlist, you can compile all the movies you want to see in the cinema or by streaming. If you switch between desktop and mobile devices, your current Watchlist will always appear on each device.

However, this service is only available if you have registered as a cinefile user (free of charge) and are logged in.

"" has been added to your Watchlist.

"" has been removed from your Watchlist. 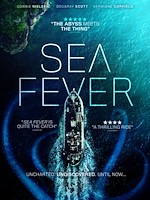 AQUATIC MONSTROUS HUIS CLOS | After an attack by a mysterious sea creature, the crew of a fishing vessel discovers a new passenger. At sea, no one can hear you scream...

Siobhán, a student in marine biology, leaves for one week on a trawler to observe fishing practices off the Irish coast. The brilliant but shy young woman has trouble mingling with the crew members, who are unhappy with the presence of this stranger. When the boat crosses paths with a mysterious sea creature, things go awry and an unstoppable disease starts spreading on the vessel, sparing no one.

As a claustrophobic thriller set at sea pitching an isolated group of individuals against an unknown creature, SEA FEVER could become the new landmark of ALIEN reimaginings. Carefully articulating its sci-fi concept, the film develops its visual identity by leveraging the mysteries of underwater life and our fascination for what we do not know. With this tense, anxiety-inducing thriller, director Neasa Hardiman proves herself a master of suspense and delivers a surprising film, elevated by solid performances and an interesting take on animal images.

Neasa Hardiman started her career in television. The Dubliner became the youngest director to work on the Irish soap opera FAIR CITY, before collaborating on many other series, documentaries, and TV programmes. The two-time BAFTA winner (for her TV work) is moving on to feature films with SEA FEVER. The film was already selected at various high-profile festivals and won the award for Best First-Feature Screenplay at the London Film Awards.